If you’ve been in SEO for a long time, you may recall working hard to boost website PageRank – that was the statistic that every SEO cared about and wanted to improve.

Improving PageRank means increasing your authority (often through backlinks), which may lead to higher ranks and more visitors.

But what became of PageRank? It’s hardly discussed these days.

PageRank, believe it or not, is still utilized as a ranking factor by Google, even if you haven’t heard of it in a while.

So how can you optimize PageRank? Is PageRank still used by Google? What is a good page rank score?

In this article, we’ll go over all you need to know about Google PageRank and its significance in 2022.

PageRank is a method of ranking web pages created at Stanford University by Google co-founders Larry Page and Sergey Brin. And it is critical to realize that PageRank is all about links.

The greater a link’s PageRank, the more authoritative it is.

We may simplify Google’s PageRank algorithm by describing it as a method for determining the relevance of a webpage by evaluating the number and quality of links pointing to it.

Google PageRank: A Brief History
On September 1, 1998, Google submitted the first PageRank patent, which became the initial method that Google used to evaluate the relevance of a web page and rank it.

In brief, Sergey Brin’s notion that content on the web might be ranked based on a website’s link popularity, that the more links point to a page, the higher it ranks, was the foundation of Google.

And, if we look at the article that launched Google, we can find PageRank mentioned while discussing the search engine’s features:

The Google search engine crawler has two key aspects that enable it to deliver very precise results. To begin, it uses the Web’s link structure to generate a quality score for each web page. This rating is known as PageRank, and it is explained in full on [Page 98]. Second, Google uses links to enhance web search results. 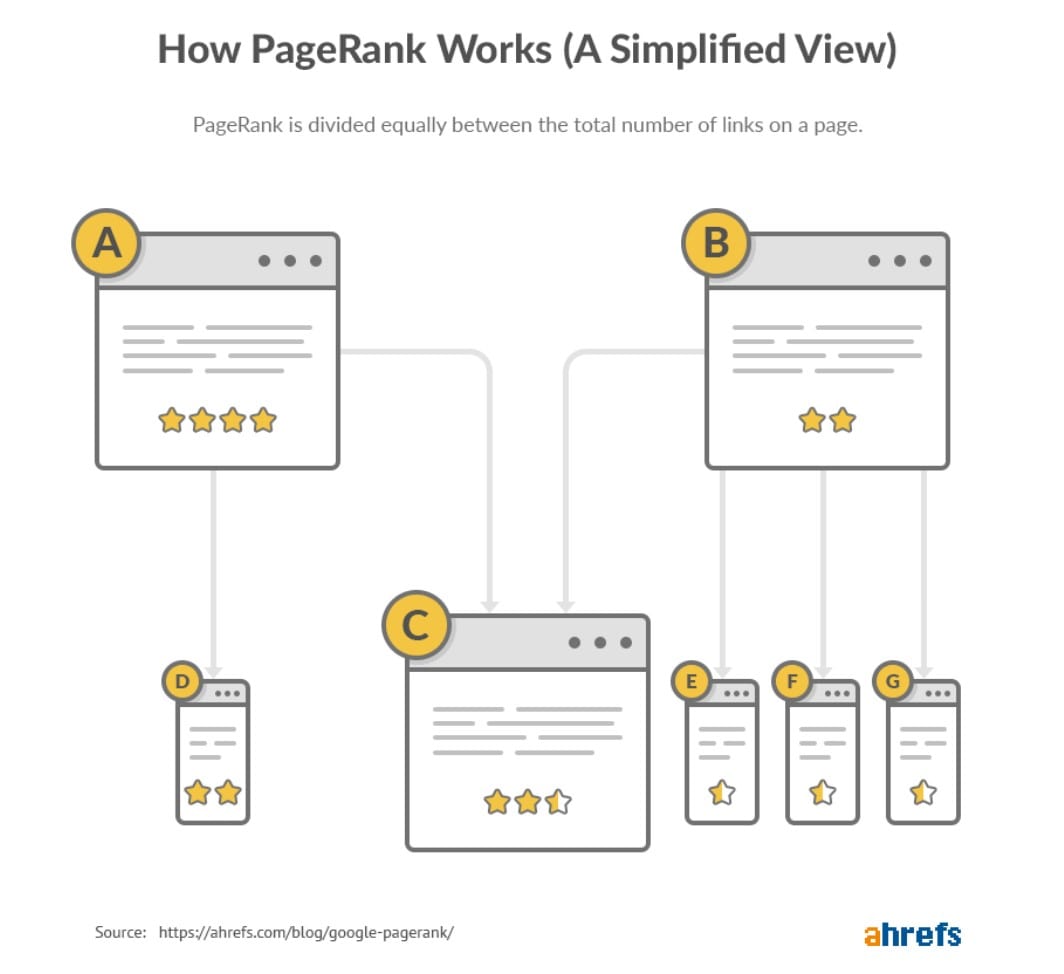 PageRank is essentially what distinguishes Google.

According to the study, “the web’s citation (link) graph is a significant resource that has largely gone underutilized in present online search engines.”

The Launch of the Google Toolbar
Google launched the toolbar that we all now know as the method to check our site’s (and our rivals’) PageRank score in 2000.

As a result, SEOs were obsessed with boosting PageRank as a metric for ranking improvement, primarily due to a misunderstanding of the algorithm that suggested that a web page with the most links should rank first.

Many people in the early 2000s used the easy method of obtaining as many connections as possible from websites with the highest PageRank possible.

This, of course, led to the manipulation of PageRank, with money passing hands for links as well as what many of us remember as link farms.

Fast forward nearly 15 years, and Google would cease updating this public-facing toolbar PageRank in 2014 (the last verified change was in December 2013) and entirely remove it in 2016.

Of course, this does not imply that Google has abandoned PageRank as a component of their ranking algorithm, only that it is no longer a publicly visible statistic.

Why Is PageRank Important?

PageRank is significant because it is one of the variables that a search engine, such as Google, considers when deciding which results to display at the top of its search engine listings (SERPs)- where they can be easily viewed. (While PageRank is a Google trademark, other search engines employ similar algorithms.)

It is not the sole, or even the most significant, consideration. To begin with, your website must be relevant to the search – if someone is looking for plumbers, your page about online banking will not appear, no matter its high page rank. But, all else being equal, PageRank has an influence on search engine ranks.

In practice, what does this mean?

Obtaining links to your website (link building) is an essential component of search engine optimization (SEO).

Furthermore, high-quality, not number, is the most important factor — you want relevant links from well-known, respectable websites.

As a result, search engine optimization experts provide their customers with link-building services. Link building should be part of your SEO plan, whether you hire an expert or do it yourself.

In fact, studies show that for link-building services, 36% of organizations use outside specialists or freelancers.

Is PageRank still used by Google?

While website owners may not have access to this data, it is still used in their algorithms.

A tweet from Google’s John Mueller, a Senior Webmaster Trends Analyst, confirms that PageRank is still utilized as a ranking system. 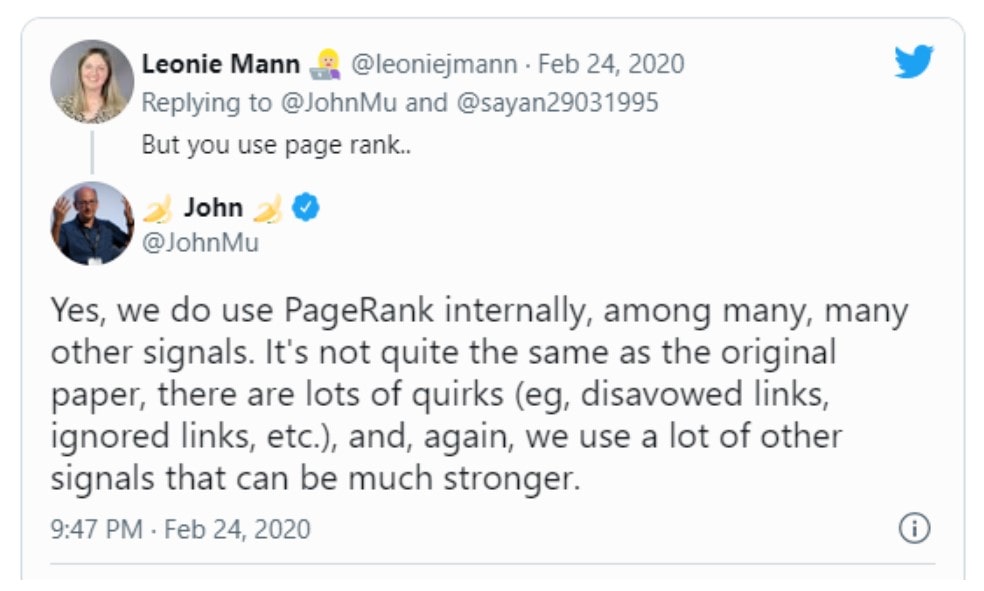 The original PageRank patent from 1998 expired in 2018 and was not renewed, much to the astonishment of many. A former Google employee verified around this time that the old algorithm had not been utilized since 2006.

But this does not imply that PageRank is extinct; far from it.

The previous patent has been superseded by this new one.

The new invention sought to provide a ranking score to a web page based on its distance from a seed set. However, this patent makes no mention of PageRank (or claim to be an updated version of the algorithm).

Rather, the SEO industry believes that it operates as a PageRank modifier depending on the closeness to the seed set of sites.

How do I optimize PageRank?

There are several variables you should be aware of that can have a good influence on your PageRank. Let’s look at a couple of them now.

Backlinks are the most important technique to boost your PageRank. The more relevant and authoritative websites that connect to you, the better your PageRank.
Here are some ideas for generating valuable backlinks:

Building backlinks is one of the most effective strategies to develop your website, but it must be done correctly. Be genuine, avoid spamming organizations or communities, and, most importantly, generate engaging content.

You should also ensure that any malicious backlinks have been removed.

Obtaining links from directories or pages with a high number of links is less useful for increasing PageRank. Every link on a website dilutes the PageRank value of your link, so while directory-type links might be useful in other ways, they won’t assist you much with PageRank.

One of the most common misconceptions regarding outgoing links is that connecting out from your content might reduce the PageRank of that page.

This is not correct. Remember that the entire idea of PageRank is based on links.

While the number of links on a website may impact the “value” of that link to the page to which it is connected, it has no effect on your own. If you come upon content that your visitors would find useful, you should certainly include a link to it.

According to Reboot research, there is a favorable association between a page’s PageRank and its outbound links.

You can also use the rel=”nofollow” element to instruct Google not to transfer any link juice.

One of the most underused SEO tactics is internal linking. You may significantly improve your rank and traffic by employing internal links to transmit PageRank from one page to another.

As an example, because of the number of websites that connect to it, your homepage will generally have the greatest PageRank.

Every link from your homepage to another page on your website increases the authority of the page to which it is connected.

Consider utilizing an SEO tool to discover high-authority sites on your website and adding links from those pages to lower-authority pages (where applicable) to give your pages a boost.

A fast tip is to check at your Google Analytics – the sites with the most organic traffic are generally the pages with the most authority. So, as long as the links are related to the content on the page, you may start leveraging those pages to develop inbound links to fewer important pages to give them a fast boost.

What is a good page rank score?

PageRank, somewhat unexpectedly, is a complicated algorithm that provides a score of significance to a web page.

In terms of everyday SEO, however, PageRank was a linear representation of a logarithmic scale ranging from 0 to 10 that was shown on the PageRank toolbar.

A PageRank of 0 denotes a low-quality website, but a PageRank of 10 denotes only the most authoritative websites on the internet.

Some websites promise to give you your PageRank, but because they are not certified tools, there is no guarantee they are delivering correct data.

Other programs, such as Ahrefs, SEMrush, and Moz, have developed their own versions of numerical values designed to imitate the PageRank score.

SEMRush, for example, has what they term an “authority score,” which is a numerical rating that indicates how beneficial a backlink from a website may be. This score is determined by:

The key to understanding PageRank scores is that they are calculated on a logarithmic scale. Not sure what it implies in plain English?

“A logarithmic scale is a method of showing numerical data over a very wide range of values in a compact manner—the highest numbers in the data are often hundreds or even thousands of times bigger than the tiniest numbers.” — Wikipedia

Hopefully, this article has given you a better understanding of PageRank.

We may no longer have a toolbar, but that doesn’t mean we shouldn’t grasp how it works and the elements that impact it.

In many respects, it’s a good thing that SEOs stopped worrying over this one statistic, because it contributed to a change that means, for the most part, the business isn’t reliant on deceptive techniques.

SEOs misused PageRank, and we lost the toolbar as a result, but this isn’t necessarily a negative thing in the eyes of many. What matters most is that you adhere to established practices for linking, such as utilizing relevant anchor text.